+ May I speak in the name of God: Father, Son and Holy Spirit. Amen.

Jubilate! In a hard week of loss for my family we have had good news: my beloved parents, who are both in their late 60s, have just had their vaccines. They came back from the experience elated, something it’s perhaps rare to associate with a perfunctory visit to a two-star hotel in Mansfield!  They couldn’t get over the kindness, the friendliness, the huge sense of collective goodwill in the air. For once, the Blitz spirit of the pandemic held true, it really was ‘Jab for Victory’.

It’s been lovely to see spirits rising as we make this massive, valiant effort of so many doctors, volunteers and willing arms. And such a corrective to how alone we have all been. And it helps us, I think, look anew at Lent too.

We can sometimes find ourselves looking too much at Lenten discipines as New Year’s resolutions—personal commitments, in which we then feel we personally fail when it proves hard to keep them up. I said on Ash Wednesday how important it is to not turn Lent into a time for merciless self-punishment, however virtuous. How important it is to ensure we are taking things out to build ourselves up, and are fundamentally still able to feel the JOY of doing so. Our readings today are also about being together. The covenant God makes with the whole of creation, is fulfilled by Jesus’ life-giving love for all. We are told specifically in our reading from Peter that he goes down to those whom we might have thought had been drowned by Noah’s flood and sweepts them up too in his promise. We are in that New Ark of the promise, deeply connected to one another and to every living thing by a common hope.

So in Lent, too, we’re doing something which should draw us closer together to flourish, not further apart to fail. The fasting rules, as they still are in the orthodox church, used to be held in common too. Which made it a lot easier, of course, if no-one was there to glug large quantities of red wine before your nose or consume mars bars you were denied! And the other elements, giving alms, praying, by their very nature draw us into more relationship to one another.

The other thing is that Lent is a bit LIKE a vaccine. We take a dose of the desert and the wilderness, a safe dose we know has been taken by many before us—and above all by Christ—and it equips us, rebuilds us, for the challenge of the much harder and more deserted wilderness our hearts and worlds can be. We go into God’s wilderness, and, we should remember, we are ministered to there by angels. And our reading also asks us, as all through Lent we are asked, to not even stay there but to look beyond it, to the other side, where Christ declares his Kingdom has come. For, as I said on Ash Wednesday too so apologies for repeating the line, we may be going into the shadow of the cross but it is a shadow cast by the beautiful, true, radiant light of resurrection hope, joy and life without end. 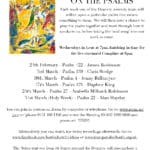 Each week one of the Deanery ministry team will reflect upon a particular psalm that means something to them. We will then have a chance to pray the psalm together and work through how it speaks to us, before taking the ‘soul song’ into our week to come. Wednesdays in Lent at 7pm, finishing in […]

More Posts from this Category

They replied, “Believe in the Lord Jesus, and you will be saved—you and your household.”
Acts 16:31
DailyVerses.net