792: Abbot Aethelheard (of Hludensis Monastery) is appointed Archbishop of Canterbury. The Church is believed to be dedicated to St Herefrith, perhaps being built on the site of his Shrine.

1247: The Church is rebuilt. Edward I is crowned, succeeding Henry III.

1447: You are now in Louth in the 15th century – generations of men spend their life working for the Church as labourers and craftsmen, rebuilding St James’ Church. The building is moved 1.2m and raised by 50cm on new bases. The tower is built separately, and will be joined to the Church at a later date. A labourer has a very hard life – their working day starts at daylight, and finishes when the sun goes down.

1449: The roof of the Tower is strengthened in preparation for the building of the “Broach” (Spire).

16th Century
1501: It is the early 16th century, and the population of England is recovering from losses caused by the Black Death. John Cole is Mason in Charge of the Spire.

1503: Thomas Sudbury (the Vicar who retired last year) has given the Church a magnificent Hutch, for keeping valuables. It has medallions on the doors, depicting Henry VII and Elizabeth of York, with the crowned Tudor rose in between.

1509: Henry VIII succeeds Henry VII as King. In this year, Henry obtains an annulment of his marriage to Catherine of Aragon. The English Language is evolving rapidly, and half the people can read and write. Our chief export is raw wool.

1514: John Tempas takes over from Christopher Scune as Mason in Charge.

1515: The Weathercock is placed on top of the completed Spire. It is made from the great Copper Basin taken from the Scots at Flodden Field. The people of Louth are very proud! It is the 13th of September, and the Spire (which is the tallest of any Parish Church in England) was consecrated today, to the singing of the Te Deum. Great celebrations began, and the six Bells including the Great Bell, called James and weighing 26cwt, could be heard across the town, in proud proclamation of years of hard work and skill. There will be some sore heads in the morning, as free Ale was given out this afternoon! The total cost of building the Spire is £305 8s and 5d.

1534: The “Act of Supremacy” transfers Papal supremacy over the English Church, to the Crown.

1536: It is the 1st of October, and after Evensong, only 21 years after the great celebrations of the Consecration of the Spire, a riot has started. This is a reaction to rumours of Monasteries being closed, and of Church wealth being confiscated.

1537: It is the 25th of March, and the Lincolnshire Rising has ended. Thomas Kendell, Vicar of Louth will be executed at Tyburn.

1547: Images are removed from the Church.

1550: The English Church becomes Protestant in doctrine and ritual, under Edward VI.

1554: The Reformation under Edward VI and Elizabeth I, and the Counter-Reformation under Mary, causes great changes in the Church. At our Church of St James, new Images are being installed, and the Chantries swept away. Strict ritual is introduced.

1558: Elizabeth I succeeds to the Throne, and consolidates the Church of Englands position.

1632: There is a great storm this year in Louth, and the Spire is damaged, and needs repair.

18th Century
1720: An idea to improve the services at St.James, by changing the pews around, is executed. The more well-off, who subscribed to this appeal for funds are excused pew rent. This favour will be passed on to their descendants. Charles Edward Stuart, (Bonnie Prince Charlie) is born in France this year.

1726: The ring of eight bells is recast by Daniel and John Hedderley, bellfounders of Derby, and hung in a magnificent wooden frame. This (still) is the heaviest eight-bell peal in Lincolnshire, and the eighth heaviest in the country – the tenor weighing 31cwt 1qr 7lb. The Prime Minister is Robert Walpole. Gullivers Travels is written this year.

1751: The Gin Act (tax on “Geneva Spirits”) is introduced, to curb two epidemics of drunkenness, as in one shop’s advertisement: “Drunk for a penny, dead drunk for tuppence, straw free!” (i.e. to sleep on).

1775: William Williams R.A. paints the tall pictures of St Peter, St James and the Deposition from the Cross (now hanging in the nave).

1727: Declaration of Independence for U.S.A.

1780: Reverend William (Wolley) Jolland is vicar of Louth. During his time, galleries are constructed over the aisles, and the reroofing and reseating continues. His eccentricity is well known; he has built a hermitage in the vicarage garden, and he embellishes his services with his own asides. His portrait by Richard Jones hangs in the clergy vestry.

1783: James Watt coins the term “horsepower” as a measure for his new steam engines. Public executions are abolished.

1793: England and France are at war, and an invasion of England is threatened.

1796: A new Organ is presented by David Atkinson of Fanthorpe Hall, with the provision of a Gallery in the Tower, and £600 to provide an Organists’ Salary.

1802: The “Health and Morals of Apprentices Act” restricts child labour in cotton mills to those over 9 years of age, and reduces their working day to 12 hours.

1811: The Prince of Wales is named Regent to act for (the insane) George III. There are Luddite riots in the North and Midlands, the Labourers fear that the new machines in the factories will replace them. “Sense and Sensibility” is written in this year.

1815: A new Clock by James Harrison of Barton is provided. This is the year that Napoleon escapes Elba, and the “Hundred Days War” begins.

1820: George III dies, and is succeeded by the Prince Regent as George IV. We are in the 1820s, and Tennyson is a schoolboy living at 74, Westgate Place. He is studying hard, in the hopes of going to Cambridge.

1825: New roofs and ceilings for the Nave and Aisles are installed, using plans drawn up by Edward James Willson of Lincoln, and William Coulam, a Louth Builder.

1829: An Engraving by T. W. Wallis, engraver, wood carver, meteorologist, and borough engineer shows the unrestored Church, with Galleries, the Thorpe Hall Pew, (John Louth’s Chantry), box pews, high reading-desk and Pulpit and the Reredos composed of the three paintings by William Williams. Over the Chancel Arch hangs a coat of arms. The Catholic Emancipation is taking place at this time.

1830: George IV dies, and is succeeded by his Brother, William IV.

1833: Slavery is abolished throughout the British Empire.

1837: William IV dies, and is succeeded by his niece, Victoria.

1844: The Spire is struck by lightning, and repairs increase the height to 295 feet. William Brown takes advantage of the scaffolding, and makes sketches for his panorama of Louth.

1848: For the past 4 years, William Brown has worked on his panorama of Louth, and it now goes on exhibition to the public.

1851: This is the year of the “Great Exhibition” at Crystal Palace. Darwin causes great controversy by publishing “The Origin of Species”.

1861: The Chancel and Stained Glass window are refurbished. Albert dies, and Queen Victoria retires into mourning.

1868: James Fowler completes his restoration of St James’, which remains basically unchanged for the next 133 years. This is the year that the Suez Canal opens, and the Union Pacific Railway is completed.

1855: Radio Waves are discovered, and the Internal Combustion Engine is invented.

1901: Queen Victoria dies, and is succeeded by Edward VII. 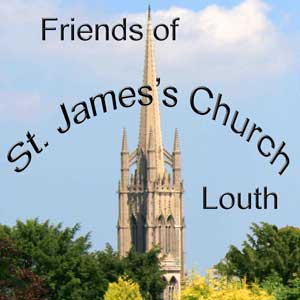