St Michael and All Angels, Louth

St Michael’s is open for a COVID-secure Eucharist at 11am on Thursdays.

Click here to go to our worship from home resources.

St Michael’s Church was consecrated by the Bishop of Lincoln in 1863 and was designed by James Fowler of Louth, a prolific architect and restorer of Lincolnshire churches.

St Michael’s became reputed for worshipping in the Anglo-Catholic tradition and over 150 years later it continues to hold dear this traditional, yet inclusive form of worship.

St Michael and All Angels was built due to 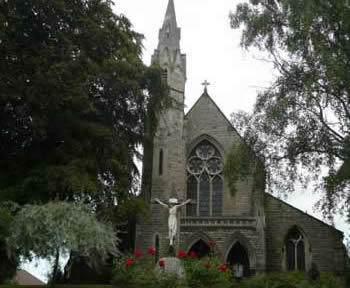 the generosity of one William Wright, (born in Somerby near Brigg on 24th March, 1785). During his childhood Wright attended Louth Grammar School which must have left him with fond memories of the town as in his later years he gave the then current vicar of St James’s a blank cheque followed by a cheque for £1000 for the purchase of the site and the building works for the church. Sadly William Wright died before seeing the completion of St Michael’s.

An organ was procured in 1864 from Foster and Andrews of Hull at a cost £300.0s.0d. The cost for this was raised from a highly successful bazaar held in Louth Town Hall, a most impressive amount considering the value of money at that time. In 1908 the present Lady Chapel was added and cost £1,300.0s.0d. Read more…